Andrés Segovia (1983 - 1987), was a virtuoso Spanish classical guitarist from Linares, Spain. He is considered to be one of the greatest guitarists of all time and is often credited with being a critical figure in shaping the classical guitar as a serious concert instrument. His full name is actually Andrés Segovia Torres, 1st Marquis of Salobreña because he was given theSpanish nobility title of “Marquis of Salobreña” by King Juan Carlos I in 1981 for his significant contributions to music and the arts. 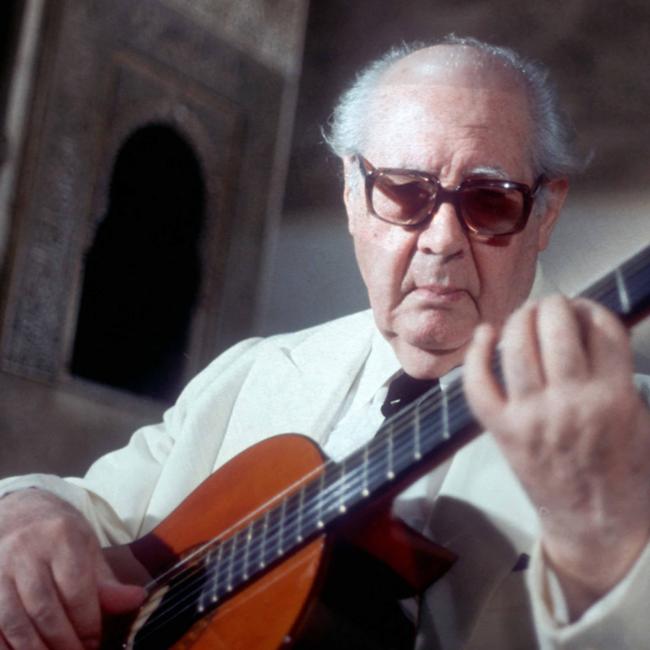 Segovia had a close relationship with many important composers of the 20th century and commissioned (or was the dedicatee) of a large number of the classical guitar’s most celebrated repertoire. Italian composer Mario Castelnuovo-Tedesco composed a large number of works for the guitar that were dedicated to Segovia including his Guitar Concerto No. 1 in D, Op. 99 from 1939.

Other composers who Segovia collaborated with included Spanish composers Federico Moreno Torroba, Federico Mompou, and Joaquín Rodrigo, the Mexican composer Manuel Ponce, and Brazilian composer Heitor Villa-Lobos who dedicated his famous Twelve Études for Guitar to Segovia. Villa-Lobos and Segovia continued to work together resulting in Villa-Lobos’s Five Preludes for guitar from 1940 and his Concerto for Guitar and Orchestra from 1951 — both are celebrated as some of the most important additions to the classic guitar repertoire.

Additionally, Segovia made transcriptions for the guitar of works by other composers, including Enrique Grandos’s 12 Danzas Españolas Op. 37 for piano, Isaac Albéniz’s Suite Española No. 1, Op. 47 for piano, and many transcriptions of harpsichord, lute, violin, and cello music by Johann Sebastian Bach. His transcription of Bach’s Chaconne from the Violin Partita No. 2 in D Minor BWV 1004 is famous for its extreme level of difficulty.

Access a playlist of some of Andrés Segovia greatest recordings on this Spotify playlist: https://open.spotify.com/user/1223083982/playlist/6wG123KLtOl0orY7rVkWyQ