The Largest String Instruments in the World

If you thought the orchestral double bass was big, check out these three giant string instruments. 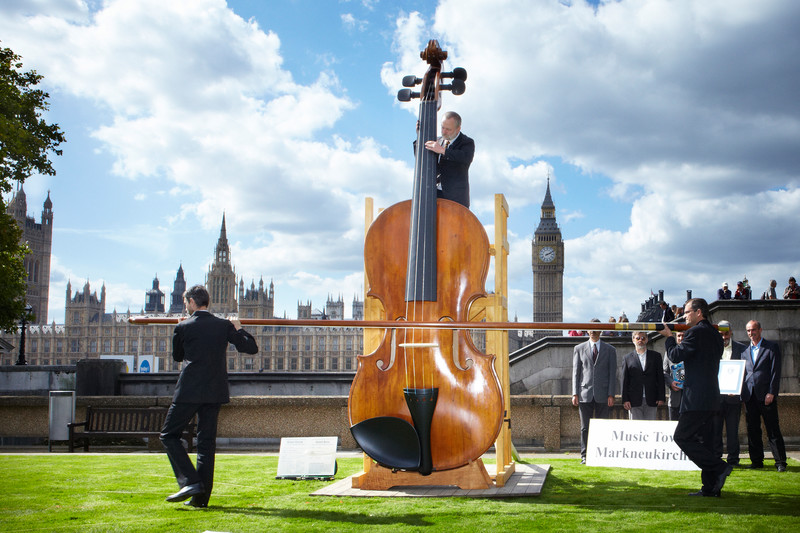 The octobass is the big brother to the double bass — it is nearly twice the size! It was first built around 1850 in Paris by the French luthier Jean-Baptiste Vuillaume. It’s 11.4 feet high and, because of its extreme size, the musician performing on it uses levers and pedals to push down frets on the strings. While a normal double bass has four strings, the octobass has three strings that are tuned to A0, E1 and B1 — A0 is the bottom note on the piano! In October 2016, the Montreal Symphony Orchestra was donated an octobass by the Quibec company Canimex and is now the only orchestra in the world to

The world’s largest violin is 14 feet long, 4.5 feet wide, and has a bow that is 17 feet long! It was constructed by 15 violin and bow makers from the town of Markneukirchen, Germany in June 2010 and officially entered the Guinness Book of Records in 2012 as the “World’s Largest Violin.” The giant violin is an up-scaled replica of a violin made by Johannes Georg Shcönfelder II in the late eighteenth century and is tuned three octaves lower than a normal sized violin.

With strings that extended up to 1,000 feet in length, the Earth Harp is the longest string instrument in the world.  It was developed by William Close in 1999 and got its name because the first time it was installed, the strings ran from one side of a valley 1000 feet across to the other side, turning the landscape into a giant harp. The long strings are played with gloves that are covered in violin rosin, which the performer rubs along the strings to vibrate them and make a sound wave. The instrument has been installed and performed in the Seattle Space needle, Temples in Vietnam, the Grand Theater of Macau, The Coliseum in Rome, the Kennedy Center and the Lincoln Center, amongst others.